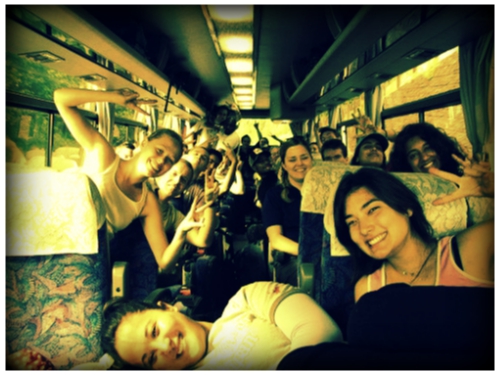 We have our first event transport buses officially under our belts!

Last week we had our first ever event as the official transport partner to the Border music festival Riverside Rock.  It involved 3 busses picking up in 8 different places arriving at the festival at midday then the return busses leaving again at midnight.

It was great to finally see our hard work come to fruition. I organised activities and tours in a previous job for several years and once had 6 full size coaches lined up on one street to take over 350 people to 5 difference places and this brought all those old feelings back. I should also say a big thank you to the organisers of Riverside Rock. There was a reason they were our first event, they helped publicise us and get our name out to as many people as possible. They also happen to be a great hard working bunch of people.

The festival was also a good test for our website and highlighted some things we need to add to our service, but in general it went as well as could have hoped. The big positive was speaking to people who were booked on our busses and getting their thoughts and feedback (if you were on one of the busses and want to give us feedback then email info@fillmybus.com).

Some people didn’t realise that we don’t own the coaches but charter them by demand. Explaining that was much easier when they got to experience it in practise. You can get a bus from anywhere, to anywhere, at anytime if you have the numbers to fill it, even it’s the middle of the night and you live in a countryside village. Someone also compared it to being on holiday when you get the bus from the airport then people get dropped off at each hotel. Hopefully that was a a positive thing…

Anyway, the box was ticked and now its on to our next events. We have a bus going from Hawick through Galashiels to Little Mix in Ingliston which should be fun. I’m off to buy some Little Mix Cd’s for the journey to get everyone in the mood.  Oh and if you need transport to any event then Request a bus for free.

We are primarily a ‘bus share’ service that brings people together from the same area that want a direct, comfortable, cost effective mode of transport.

An eco friendly way to travel

By continuing to use the site, you agree to the use of cookies. more information