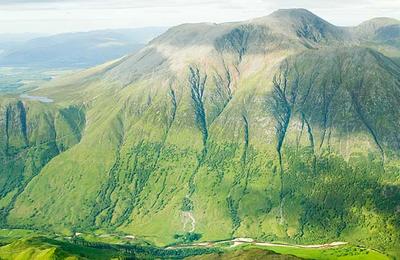 As we continue to plan and develop our Bag a Munro Club (email info@fillmybus.com for more info) and push the eco friendly benefits of ditching the car and sharing a bus, we are lucky to have Rich Pyne from Rich Mountain Experiences guest blog for us. He is talking about the upcoming event of cleaning up some of the UK’s most famous and beautiful mountains.

This year, not only do we have the “Big 3”, Ben Nevis, Scafell Pike and Snowdon, but also Lochnagar, Cairngorm, Ben MacDui, Ben Lomond, Goatfell and two areas of The Peak District!!! We’ll find out after Saturday 7th October 2017 how we got on…

“When I started the Real 3 peaks challenge, I was working as a full time Instructor for another company. Now, since January 2015 I have been the owner of Rich Mountain Experiences, a company that works to give their clients the best experience of the Scottish Highlands possible.

This started as little crusade, but now it has become my cause to make a difference, ultimately to change the attitude towards our “common land”.” 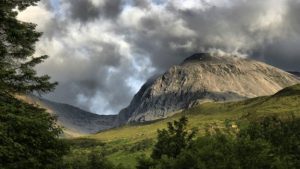 The name “Real 3 Peaks Challenge” was picked for this reason…

the REAL CHALLENGE is cleaning up after the 3 PEAKS Season.

The date was set to leave the deep clean until the tourist season has pretty much finished, but before the winter snows come, leaving the places spotless for the Spring thaw.

“The Real 3 Peaks Challenge was a concept born back in 2013 from a day out with clients for a summer guided hill walk on Ben Nevis. Whilst my clients were eating lunch, I decided to pick up some rubbish off the summit as it was looking rather sad. I managed to fill 2 carrier bags in as many minutes.

From this point, rather disappointed in humanity, I wrote about my findings on a Facebook page, from where somebody said, “Why don’t you do something about it?”

The Summer of 2013 was spent with all my spare time in contact with several of the big Trusts and Organisations. I did not have access to a computer at the time, so everything was done off my phone…Which takes a while when your basic smartphone cannot copy and paste, so all done from paper notes, then individually typed to each and every one…It took a while I can tell you. Since then, each year has become easier to organise as we all have a database of volunteers that help regularly, and more help is offered as we become a more of a household name.
I initially was going to try and complete the Challenge myself, cleaning each hill, one after the other, but soon realised that wouldn’t be effective enough to make a difference. So I soon got together a modest group of likeminded Leaders, used to working in the outdoors with individuals and groups, to manage each hill.

These are myself, Rich Pyne (www.richmountainexperiences.co.uk), with a massive amount of help from my wife Monika Pyne on Ben Nevis, I couldn’t do it without you; Kelvyn James (www.mountainservices.co.uk) on Scafell Pike and Ross and Kate Worthington (www.raw-adventures.co.uk).

Back in October 2013 we managed to clear around 265KGs off the major routes on Ben Nevis, Scafell Pike and Snowdon.

2016 saw a smaller amount coming off the other hills, but Ben Nevis was huge at 267KGS on its own! The toilet was pretty heavy!!!

So basically, for 4 days of litter picking, we have removed nearly 1.8 Tons!!!!

We are now starting to find older items that have been hidden or buried for generations. These include historical drink cans (The ones that the ring pull comes right off), thick glass bottles, industrial waste from building and even a rubbish stash that looked to be dated from the days of the Summit Hotel and Observatory on Ben Nevis back in the early 20th Century!

Each mountain has its own unique story about its development as Victorian tourist destinations…Snowdon’s railway and Summit Cafe, Ben Nevis with its Observatory and Hotel…Not many folk know that there was serious talks going on in the Victorian era about a railway to England’s Summit…

“So, the aim of The Real 3 Peaks Challenge is to make the average person aware of the “Leave no Trace” or “Take nothing but photos and leave nothing but footprints” attitude…Not only for the 3 biggest hills, but also all our beautiful places.”

Now in its fifth year, we have steadily become more visible within the Outdoor Industry and with land managers, local organisations, conservation charities, landowners and activity providers. We now command in the region of 50 – 60 thousand people reached via our Facebook page posts, before and after the events, and with the likes of Balmoral Estate sharing our posts, we should reach record numbers this year. 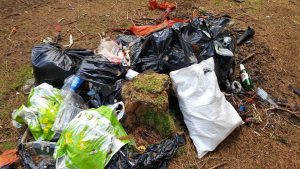 We aim to increase this traffic throughout the months between an annual event on the mountains (www.facebook.com/Real3peaks). Those working in the outdoors, landowners, conservation charities and land management teams have all been managing litter issues for a long time, but I do not believe that these efforts have had enough exposure with the general public, as well as those visiting these particular mountains. Now there is more potential to increase visibility.

Here are some examples of ordinary folk helping us out…

Peter Glasper couldn’t make the day, so he did his own thing and shared it with us…

A while back, I was having a conversation on Facebook with regards to the littering issues and how long “perishables” last. A chap came back to me with “I understand about plastic bottles, but what is wrong with leaving banana skins.. they degrade?”

But on a refreshing note…

Dee, the Post Lady from Skye, and this guy, Chris Littlehales, who runs his own 3 Peaks Challenge company, have done their bit for the R3P.

Chris always sets his clients a mini competition on who can bring the most litter down off each hill…they win a T shirt!!! But, he has been incredibly effective…

And also an example from my wife….Last year she decided to clean the Red Burn and down (On Ben Nevis). She was struggling with several bags of litter, with no one offering her help with carrying the litter. Except for a little Chinese lady that insisted on taking one on her behalf, even though she was on holiday. Monika was very grateful…

So now, here is a breakdown of some of what we found on the 3 highest hills…

Rubbish found, in no particular order…The more exotic finds are mixed amongst...

And once, a dead vole trapped inside a plastic bottle. Wild life dead because of an action that can be avoided.

Just imagine, that with the million or so visitors each season that go to just these 3 hills, picked up one piece of litter each, how long would it take them to make these hills pristine and not need the 100+ volunteers to clean up each year?

Just a thought…What can we do for change? Do normal people really leave rubbish around their house, gardens, and local beauty spots? Why do they do it here and not in their homes?

I have spoken with a multitude of people on the hill about the littering problem, and no one can understand “why?”

“Is it not lighter carrying it down empty?”

Education is the answer I believe. All kids are educated in school that glass does not disappear, plastic lasts forever. Why does the attitude change once they are away from eyes? That’s the reason why most of what we find is “hidden”, “wedged”, or “buried”…These people know they are doing wrong.

So my personal message is “why do it?”

So, if you would like to volunteer to help on any off these hills and maybe Bag a Munro while you clean, or if you want to organise your own litter pick on the 7th October 2017,then please use the contacts below for the relevant hills…

We are primarily a ‘bus share’ service that brings people together from the same area that want a direct, comfortable, cost effective mode of transport.

An eco friendly way to travel

By continuing to use the site, you agree to the use of cookies. more information